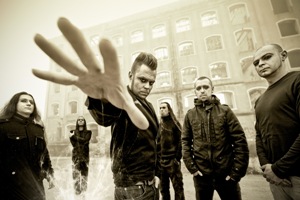 Hi guys! Thanks for your time and welcome on our webzine Alone Music. First of all, can you tell us how and why the “Firstborn” project was born?

Ciao, grazie mille! The Firstborn were founded by myself back in 1995, as “Firstborn Evil”. We were a bunch of 16/17 years old kids with nothing better to do and decided to form a band inspired by the music and visuals of the bands we were all listening to at the time. Needless to say we played a very cliché type of Black Metal. We recorded a demo and managed to get an album deal, but very soon we started to branch out and look for other forms of expression… and by the year 2000 we were already so distant from where we started that we decided to change the band name and adopt the simpler, more vague “The Firstborn”, when we were about to release our second album.

I read on your biography that in 2001 you have interrupted this project and in this pause you have decided to work on your material in a different way that in the past, after “The Unclenching Of Fists” was born and it sounds very different to the first black albums. Why this change?

As I said, we were actively looking for change and evolution for a while then and after we played a lot of shows to promoter our second album “From the Past Yet to Come” we were a bit disappointed with the band’s direction and what we had accomplished so far. So we took a break and decided to carry on in a different direction, and that’s how we ended up with “The Unclenching of Fists”. The previous album was already radically different from what we had done in the first few years, but only then did we really find our own language and started treading a path we could call our own.

How “Lions Among Men” was born? Is a natural continuation of a path or there’s a detachment from the rest of the “oriental” discography?

I would say “Lions Among Men” is a refinement of what we did best in our two previous albums. Since we began approaching this concept I always felt that we still hadn’t attained a perfect symbiosis between music and lyrics… only at times was the atmosphere created by the music fitting for the lyrics, and that was something we addressed in “Lions Among Men” from the very beginning. Atmosphere was to be the main purpose of the writing process, our number one concern when creating the song structures and arrangements, and I believe we fully achieved what we set out to do. Also, in the preceding albums there was also more of a contrast between the more “normal” instruments and the traditional oriental ones we began using, which sometimes worked, and sometimes clearly didn’t. This time we tried to have the more “ethnic” side become an integral part of the musical tapestry, if we may call it that, being woven into the music instead of overlapping it like before.

Your concepts are closely connected with the buddhist philosophy. How you approached this subject?

When we started writing for “The Unclenching of Fists” we quickly realized that we were tapping onto something different, something new… the music that we were writing had this weird, almost “exotic” feel and I began looking for a concept that would fit this atmosphere, and that’s how we eventually started to become interested in Buddhist philosophy, so much that what was initially a search for more interesting aesthetics quickly became the whole foundation for the band’s concept, music, lyrics and visuals. Nowadays it is the defining aspect of the whole writing process, something we try to put across in every single note we play… and to think this interest started out as something so shallow and superficial! It made us grow as a band, as musicians and maybe as individuals as well.

The adjectives that I feel to use to describe “Lions Among Men” songs are “heavy” and “depressed”. Why in your album you associate the buddhist theme, that in the west of the world is much positive, with “doom” songs like yours?

This album is about detachment from the material world, something that people hold on to for reasons they themselves do not know… to rid oneself of these urges, to cleanse the mind and be free of these restraints can be a very violent experience, especially for us westerners where the world is dominated by capitalism, trinkets and superficial “needs”. So to bring out the positive, you have to experience this withdrawal, this very negative process in which you feel an emptiness take over you when you’re suddenly confronted with how shallow and unfulfilling most of your concerns actually are – and that’s what we try to depict with our music. Buddhism isn’t all about nirvana, harmony and illumination… the process to reaching that stage can be a very troubling one, a unique experience for each and every one of us.

What do you think about the scene to which you belong? A growing phenomenon or an underground genre destined to disappear?

s there a “scene” we belong to? If so, I would like to know it! All jokes aside, we know there are a few more bands trying to bridge the gap between Metal and Oriental music, some of which we’re acquainted with already and have deep respect and appreciation for, but personally I doubt that we will ever see a very popular movement based on this kind of music because, by definition, it has very specific aesthetics that won’t appeal to a much wider audience… and maybe it’s for the best, I wouldn’t like to see a lot of copycats trying to emulate what, for instance, The Firstborn are trying to do because there’s a lot more to us than just the music, something that people trying to replicate what we do would probably fail to understand.

In general, how you considered the metal scene in Portugal?

Well, there isn’t one… what we have here is very small and fragmented, filled with constant bickering. It has improved slightly over the years and, in that regards, the newer bands are much more supportive of each other and work a lot harder than bands did when we started out, organizing festivals and regularly playing shows together. However, it’s still very hard for a Portuguese band to get noticed abroad, even when you sacrifice a lot of your personal time and money to tour or play some festivals outside of our borders. There’s simply too many bands around today, and when people think of Portugal, Metal isn’t the first thing that comes to mind. There are good bands, as good or better as anywhere else in Europe, they simply don’t have the due expression and recognition.

What are your future projects (lives, tours, collaborations,...) ?

For starters, we plan on promoting “Lions Among Men” as much as possible, performing it live both here in Portugal and abroad… we are working with our agency to ensure that is possible, so if you happen to be a promoter that might be interested don’t hesitate to get in touch: comfychair@live.co.uk Other than that, we will eventually start writing for a possible future album in the near future, but as you can tell by looking at our discography we tend to take our time so until then enjoy “Lions Among Men”, which you can listen to in its entirety at thefirstborn.bandcamp.com

Our gratitude for your questions and support, hope I didn’t bore you to death with my replies… Saluti dal Portogallo! “As trees bear fruit, may these words bear the fruit of a good karma.”